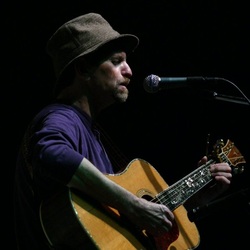 Guy Benson blends heartwarming Americana, Folk songs and ballads with fast and fluid fingerpicking guitar instrumentals and Traditional tunes. His finger style guitar work is showcased in his original pieces and in those borrowed and rearranged from finger style masters Leo Kottke, Davy Graham among a few.  It provides moving backdrops for original songs and cover tunes, selected from a wide range of eclectic authors.

In June 2013, Guy Benson took first place in the Utah State Fingerstyle Guitar Championship, held at the Ogden Music Festival in Ogden, Utah. In 2012, Guy won the Oyster Ridge Wyoming State Finger Picking Championships in Kemmerer, Wyoming. He has also taken 2nd Place in the 2006, 2008 and 2011, while placing 3rd in 2007. Guy won 2nd Place honors at the 2008 and 2012 Utah State Fingerstyle Guitar Championships and placed 3rd in 2006, 2010 and 2011.  In 2011 and 2012, Guy competed at the International Fingerstyle Championships at the Walnut Valley Festival held in Winfield, Kansas finishing (as Michigan Dave Irwin put it) “Tied for 6th Place with 34 other people…”

Guy has performed in numerous venues around the Salt Lake area including the IAMA Free Folk and Bluegrass Festival at the Gallivan Center, the IAMA Local Concert Series, The Urban Lounge Acoustic Café, the 2006 Utah Arts Festival (with Howard Horwitz) and 2009 UAF (Solo), the 2006 Sprague Library Concert Series (with Howard Horwitz & Mark Sachetti).  He has played at the 2005 &  2006  Torrey Music Festivals, showcased as part of the headliner act “Songwriters in the Round at the 2009 Torrey Music Festival and hosted and performed in the 2010 Moab Music Festival’s opening night Locals Showcase.  He performed in the Snowbird Song School Showcase at the Founders Title Folks & Bluegrass Festival in July 2008 & 2011.   Guy also performed several times at the Christchurch, New Zealand Folk Music Club during the time that he lived there.

A highlight of 2008 for Guy was the honor of being invited to participate in two "Dan's Guitars" projects at the brand new Eccles KUER/KUED studio at the U of U.  Also featured on the recordings were Monty Dillon from the U of U guitar program, Ed Dillon and Amanda Maestro-Scherer, both recent graduates of the Berklee School of Music.

Guy Benson has shared stages with Mary Flower, Buddy Mondlock, Cosy Sheridan, Charley Simmons, Marv Hamilton, Kristin Erickson, Steve Lutz, to name just a few.  He is currently a member of the Board of Trustees for the Intermountain Acoustic Music Association and also serves in the position of Concerts Coordinator and Magazine Editor. He has been the Coordinator, aka “Benevolent Dictator” of the Unitarian CoffeeHouse for over 20 years of its 37 year existence and is a regular performer at the Alchemy Coffee Tuesday Open Mic and other Open Mics around town.  He has worked with Jon Smith as part of Salt Lake Sound Guys providing sound for concerts and festivals around Utah.
Powered by